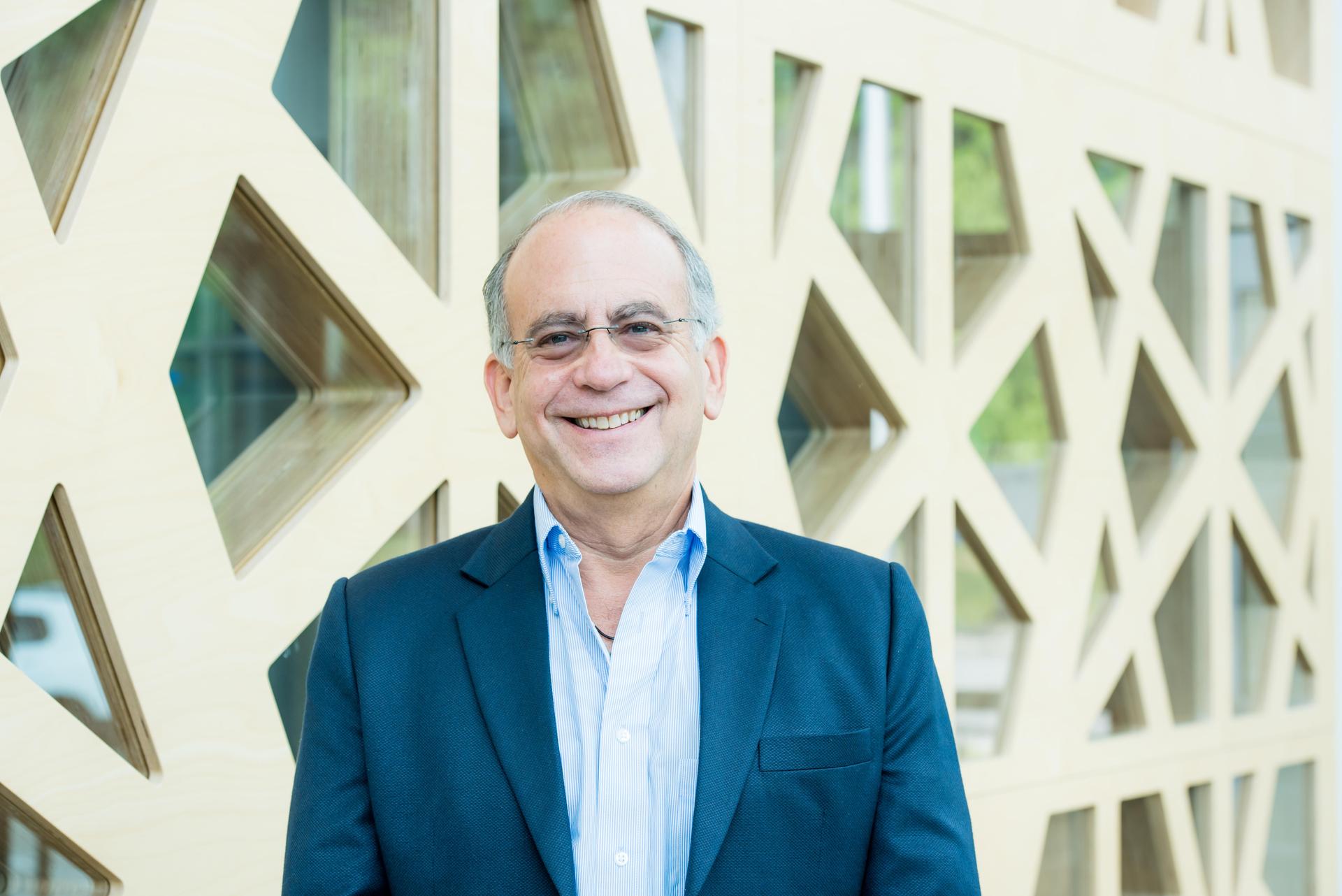 Jay Leberman comes to Mandel JDS with a seasoned forty-year career in Jewish Education and administration. Prior to moving to Cleveland, Jay was Director of the Kivunim Gap-Year Program in Israel that provides an intensive, experiential international Jewish education to college students. Before living abroad, Jay was the Head of School for 16 years at the Perelman Jewish Day School of Greater Philadelphia where he ran three divisions with over 500 students. His accomplishments include the creation of a middle school and making Perelman a more inclusive and financially stable school. Prior to Perelman, Jay was the Educational Director at the Sager Solomon Schechter Day School in Chicago for 12 years. He received national recognition for establishing programs in both schools that advocate for individual learning and allow children with special needs to receive a Jewish education.
Jay received his Bachelor of Arts in History of the Jewish People and History of Jewish Thought from the Hebrew University in Jerusalem and a Master of Philosophy in Modern Jewish Studies from Oxford University in London. With a love for the classroom, Jay spent five years teaching both high school and college classes in England before returning to the states to become an administrator. Jay grew up in Albany, New York, and was a proud member of the first graduating class of the Hebrew Academy.
Jay is a devoted naturalist, conservationist, and environmentalist with a passion for outdoor learning. Originally having studied to become a veterinarian, Jay has a love for all animals and living things. He also enjoys international literature and visiting Diaspora communities throughout the world. Jay brings a diverse knowledge of Jewish movements and communities including Orthodox, Conservative, Reform, Reconstructionist, non-affiliated, Sephardi, Ashkenazi, European, and Israeli.
Jay and his wife Soraya currently reside in Beachwood. He is the father of three sons, Hemi, Hanan, and Boaz, who made Aliyah, and the grandparent of three. His daughter Yael attends the prestigious Royal Academy of Dramatic Arts in London.

Leah Spector
Principal and Director of Judaics and Hebrew

Born in Israel, Leah Spector earned her undergraduate degree in Hearing Impaired Studies from Tel Aviv University in 1991. After moving to Cleveland that same year, she continued her education at the Siegal College of Judaic Studies, earning a Masters Degree in Judaic Studies Education. Her mission became teaching young children about Israel, Hebrew, Tanach, and their Jewish identity.

Leah joined Mandel JDS in 1992, and is now responsible for overseeing the development of the educational program, in addition to developing, supervising and evaluating Mandel JDS’s Judaics and Hebrew curricula and evaluating the Judaics division staff. Along with the Head of School, she oversees the implementation of the Strategic Plan. Leah also directly manages and supports the senior educational leadership team, including its professional development. Leah also develops and manages all class and event schedules as well as the master school calendar. Leah utilizes her love and passion for her heritage, country and religion as an educator and administrator at Joseph & Florence Mandel Jewish Day School. Her goals are to develop educated Jewish students who are proud of their identity and will become lifelong active members of the Jewish community.

Abby Berkowitz
Early Childhood Director
Abby Berkowitz has worked at the Joseph and Florence Mandel Jewish Day School since 2009. She has worked as a lower school teacher in multiple grades during her tenure at school. Abby also directs all of the lower school drama productions. Prior to her time at Mandel JDS, Abby was a youth director and choreographer for local youth theaters in the Cleveland area. She was also the youth services supervisor at the Mandel Jewish Community Center. She graduated from Ursuline College with her Master’s degree in Early Childhood Education with a Fourth and Fifth Grade Endorsement and a Reading Endorsement. When not at school, Abby enjoys spending time with her family, being creative, and cooking in her kitchen.

Halle Dubin
Head of Lower School
Halle Dubin has taught at Joseph and Florence Mandel Jewish Day School since 1995 and since 2005 has served as a lead teacher for grades 1-5. Halle has a Master’s degree in Education from John Carroll University and a Master’s of Educational Administration from Ursuline College. She has also served as the lead mentor for the Masters Apprentice Program at Ursuline College and Mandel JDS, coordinating masters degree students’ placements as student teachers; and as a Praxis III Assessor for the State of Ohio’s Department of Education. In this latter capacity, she is responsible for interviewing and evaluating first-year teachers.

Halle has been a member of Mandel JDS’s Educational Leadership Team since 2005, and has played a significant role in developing the Lower School’s team of teachers. She’s assumed these responsibilities – and the added duties of the Lower School Coordinator going forward – while she remains committed to and excited by her role as a classroom educator.

Kim Favor
Head of Middle School
Kim earned a Master’s in Teaching from National Louis University in Chicago, a Master’s of Arts in Theater from Northwestern University and a Bachelor’s degree in Communications from Concordia University in Montreal. A native Canadian, Kim is fluent in French – and proficient in Hebrew.
Prior to working at Mandel JDS, Kim taught drama at Chicagoland Jewish High School and at Chicago’s Looking Glass Theater Company. While in Chicago, she taught sixth grade Language Arts and Literature and fourth-eighth grade Gifted Language Arts and Literature at Oliver McCracken Middle School in Skokie, just outside of Chicago.
After three years of teaching at Mandel JDS, Kim was chosen to be the school’s first Language Arts Department Chair, and the following year was promoted to the Director of Mandel JDS’s Middle School. With a theater and film background and experience in gifted instruction, she brings a wealth of skills and different perspectives to her classroom and to her work with her colleagues. While she works in a “general studies” department, Kim is thoroughly engaged in and committed to the Jewish foundation of the school; in this way, she embodies the integrated curricular philosophy of the school.

Gussie Singer joined the faculty at the Joseph and Florence Mandel Jewish Day School in 2012 as the Director of Intervention Services. Previously, she was the Principal of the Edgewood Community School in San Francisco, CA, a school for students with learning disabilities. Before Gussie was an administrator, she enjoyed being a classroom teacher and a reading specialist, at different grade levels, second grade through high school, at the Edgewood Community School, where she worked for 12 years.

Although Gussie is originally from New York, her family relocated from San Francisco to Northeast Ohio, six years ago, because her husband, David joined the faculty at Kent State University.  He is a professor of Geology there, where he teaches and does research studying contaminants in the environment. David has enjoyed participating as a judge in the Mandel JDS middle school science fair for several years. Gussie has two children who are proud Mandel JDS students. Asa, 3, who is in Gan Shoresh, and Hannah, 5, who started Kindergarten this year.

Gussie graduated from San Francisco State University with a Masters Degree in Special Education and from Bates College with a Bachelor of Arts in Women’s Studies and Education. In her free time, Gussie enjoys baking, playing scrabble, making artwork, and playing in the yard with her kids. Gussie also has a very vibrant lay leadership life at her family’s synagogue, Congregation Shaarey Tikvah.